One of the best things about being between jobs this spring was the chance to spend a few days volunteering and pacing at Zumbro Endurance Runs, the Minnesota ultrarunners' annual April rite of spring. With a 17, a 50, and a 100 mile race, 580 runners, and well over 100 volunteers, it's a big production. The terrain on the 17-mile loop has something for everyone: steep climbs, technical descents, ankle-deep sand, and miles of shoe-sucking mud. The weather can be hot and sunny, below freezing, thunderstorms, snow showers... and sometimes all of the above.

It's got a special place in my heart as the race I still haven't quite gotten a handle on. Two years ago, I broke my elbow at mile 2 of the 17 miler, my first long trail race. I finished with a smile, but still wanted redemption. Last year, I attempted the midnight 50 miler and DNF'd with hypothermia at mile 34 in a thunderstorm.

This year, I wanted to volunteer for a few days and see more of the work behind the scenes, and then I jumped on the opportunity to pace. I did laps 5 and 6 of the 100 mile with Jordan, a runner I've admired and respected for his grit and determination during the Gnarly Bandit series last year.

60 hours is too much to cover in a linear manner, so here's two and a half days of Zumbro, in fragments, impressions, and moments:

- Look at the weather forecast, throw up hands, pack everything I own. Three pairs of mittens, four pairs of shoes, four buffs, two raincoats, shorts, wool hat, sunblock. Who knows? It's Zumbro.

- Drive down Thursday morning under ominous clouds. But the rain is only beginning to get started when I arrive early at the start/finish, so a quick jog up the trail. The mud is already getting a little juicy...

- Race director and a half dozen volunteers trickle in and we admire each other's raingear. There is some scouting around for a place to park the truck that isn't underwater. We eventually begin unloading gear in steady, cold rain. Pair of mittens #1 and shoes #1 are soaked.
- Cheri appears with a carload of sandwiches, Doritos, and amazing cookies. She teaches us how to work the coffeemaker. Life is getting better.
- Change mittens, hang banners, string a mile or two of Christmas lights, set up for cookout, at some point the rain stops. Hurrah!
- More volunteers show up, bringing new energy to the undertaking.
- 100 mile runners start showing up to check in. And it starts raining again. Hurrah!
- Around 7 pm, with the cookout beginning to wind down, head to Lake City to enjoy a warm, dry motel bed. Double hurrah!

- Somehow, the rain has changed to ice pellets overnight. Congratulate self for choice of motel over camping. Scrape ice off the car before heading back to Zumbro.
- 100 mile race start is a magical thing. The ground is icy but the rain/whatever has stopped. John makes his ceremonial speech from atop the ladder, counts down, and the runners are off!
- I make the drive to Aid Station 1/4 and prepare to walk the mile or so to AS 2/3, where I am volunteering. I share the walk with Ciersten, who is crewing for Andrew, a first-time hundred miler. We are passed by a steady trickle of runners. Everyone looks happy to be on the trail.
- AS 2/3 is already rocking, with Lin, Rob, Jonathan, and John in the house. Probably some other people too. It's a little blurry, sorry, guys. We make PB&Js and gummi bear shots, pour drinks, search fruitlessly for coffee filters and butter.
- Runners are coming through steadily and everyone's looking good. We attempt to start a bonfire with wet, wet wood. The race directors and Larry Pederson show up in time to help.

- Julie Berg, aid station captain, runner extraordinaire, and all-around cool person, arrives.
- A couple of runners stick around long enough to be photographed.
- It rains for an hour. I heard it snowed in the higher elevations.
- Eventually the rain stops and I decide to get serious about starting the fire. Spend an hour slowly feeding it fuel and drying wood until it's actually going. This is my major achievement of the day.
- The aid station is going strong. Runners have come through the rain and still look good. Eventually the sun breaks through and the air warms. It's past 4 pm, and I'm ready to go get some rest so I can pace.

- Check where my runner is. Attempt to do math. Set alarm for 12:30 a.m.
- Attempt to sleep in car. First it's too warm and bright, then it cools off.
- Turns out the car is actually not quite big enough to stretch out in. I'll know better next time.- Dude in car next to mine is playing NPR. Loudly. I want to kill him.- Wake up at alarm. Check with ham radio guys. Runner is still 12 miles out. Dammit. Re-set alarm.- Wake up at 2 a.m. Check with ham radio guys. Runner is still 7 miles out. Dammit. Decide to stay up.
- Stand by fire, drink coffee, eat rice and chicken I packed, commiserate with other pacers wondering where their tired 100 mile runners are. Bob Coolidge and Janet are good company.
- Return to car and put on some more layers. The sky has cleared, and 32 degrees is cold when you're not moving!
- Runner shambles in, having been paced by Linnea. She did an amazing job, but they're both cold. He warms up, eats Cheetos and soup, adds layers. 4:30 am. Let's go!
- Aaaaaaaand.... we're walking. It's a decent pace and there's a bit of running here and there, but, as Jordan had warned me, it's not going to be speedy.
- Every star in the universe is up in that sky. Half moon has risen. It's an amazing night to be out on the trail. I make Jordan stop at the top of the ridge to take it in for a minute. It's possible I get more from this moment than he does.
- Mile 74 or so: The first light appears in the sky. The first birdsong of the morning. Incredible sunrise, mist pooling in the valleys.
- Mud from yesterday's rain is drying as we go, and the trail is getting steadily better. We continue to hike and sometimes run through the loop. Jordan is moving well and the sunrise gives him new energy.
- At some point, we're no longer freezing, and even shed some layers.

- Mile 80: inbound aid station 4 just as hundreds of 17 mile runners are coming through outbound AS 1. They are wearing bright, clean clothing and smell like soap and toothpaste. They look impossibly well rested.
- Aid station volunteer shakes his head: "One of the 17 milers just asked for 'a half cup of two-thirds HEED, one-third water'. AT MILE THREE." 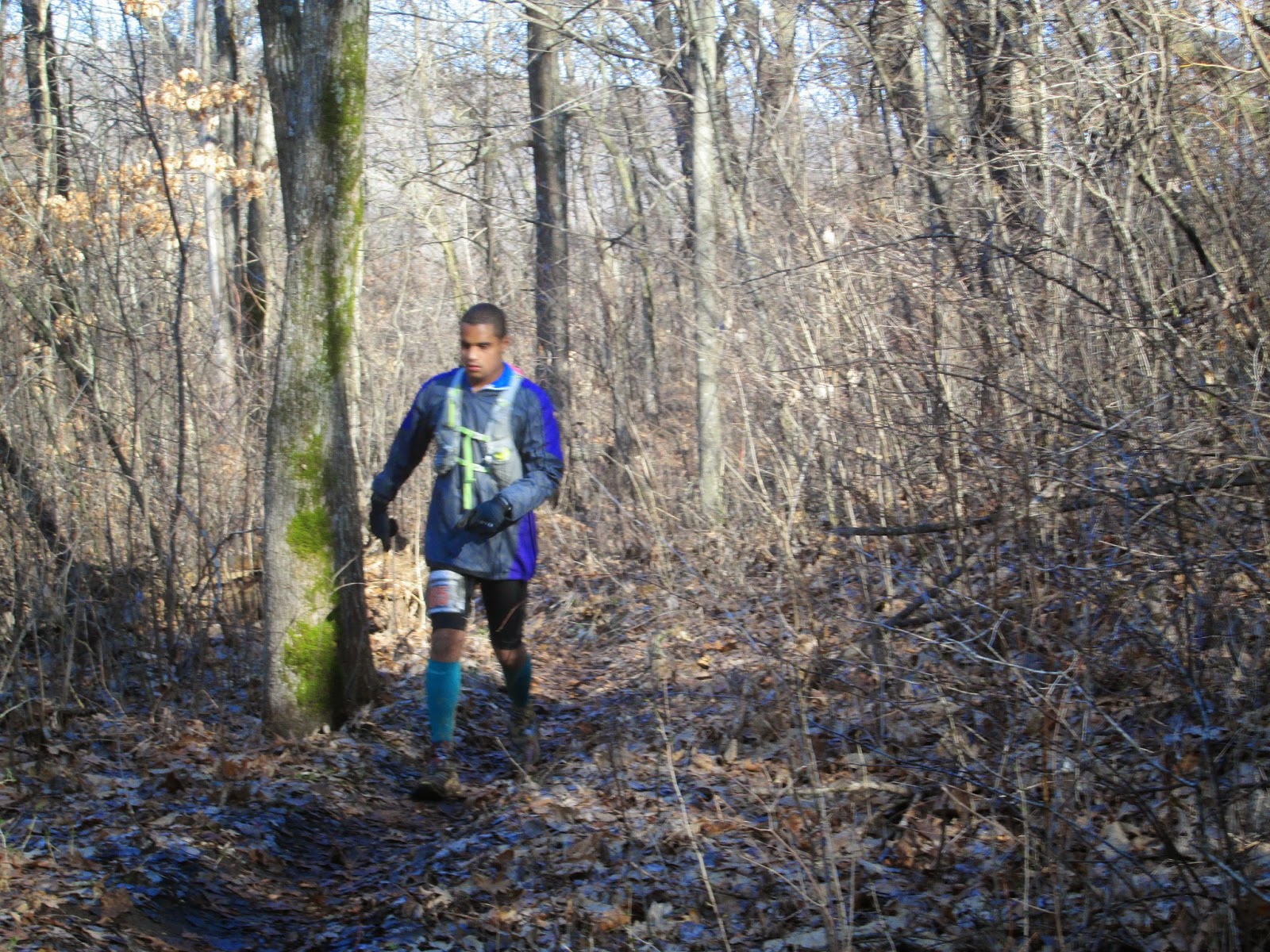 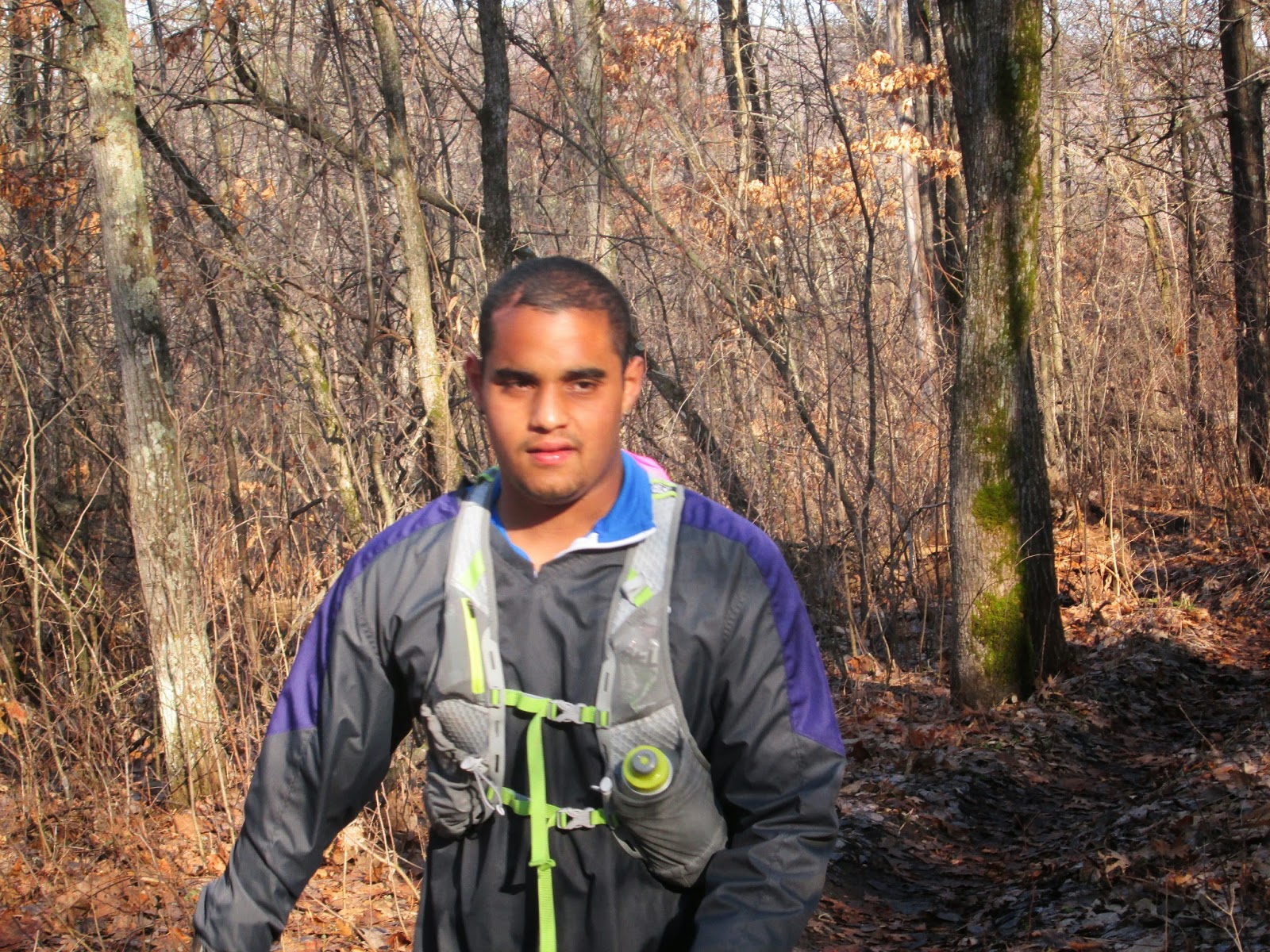 - Mile 83: Back at the start/finish of the looped course. Sheila, who is volunteering, brings me a bacon and egg burrito. It tastes like manna from heaven. I strip off my tights and change socks as fast as I can, but Jordan's still out ahead of me.
- The sky is blue, the birds are singing, the sun is shining. Suddenly, it's spring at Zumbro. 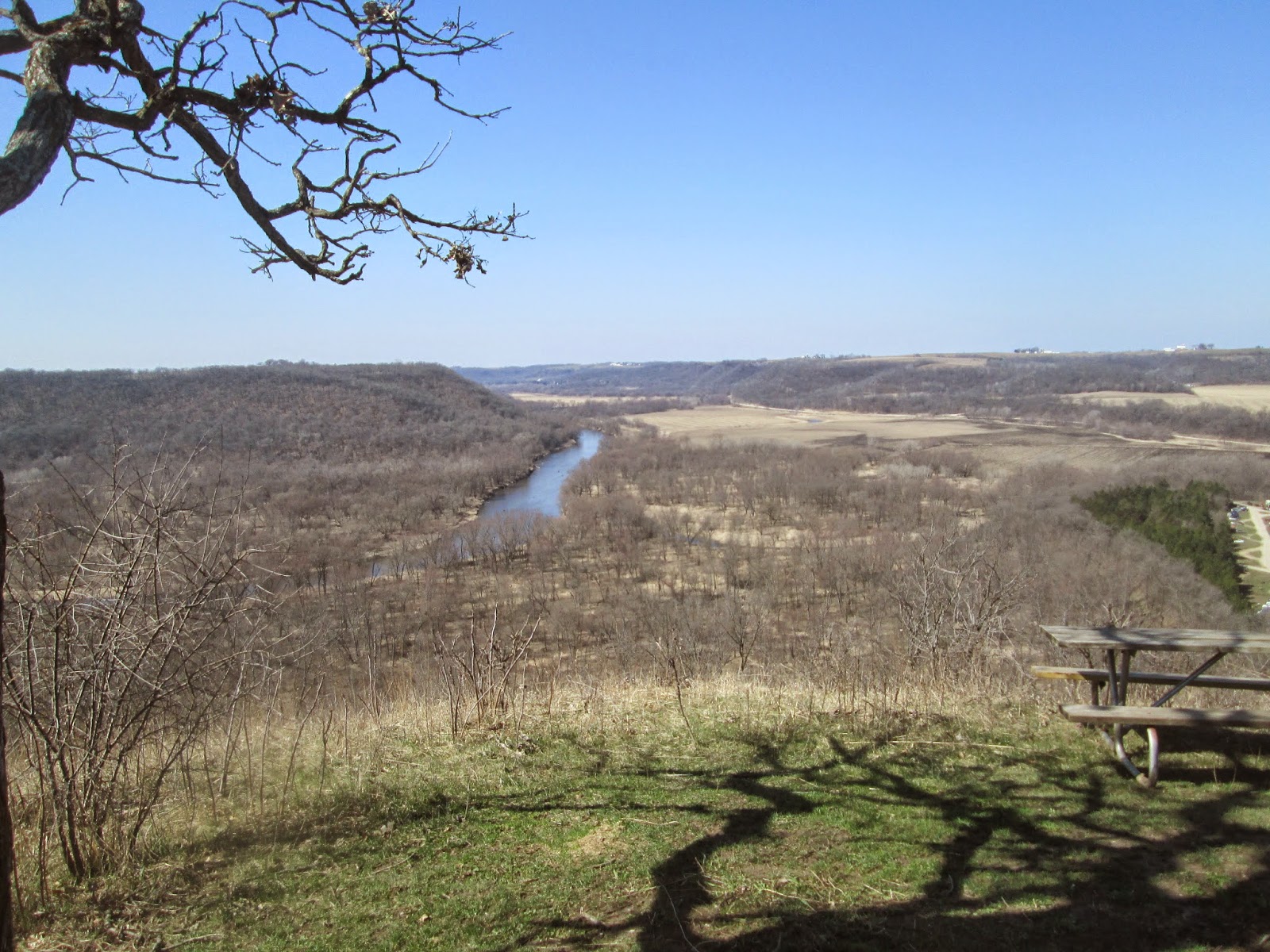 - Mile 87: Lisa is the aid station medic here, and she's a little concerned. "Is he drinking?" "Yes," I say, "he's been sipping from that bottle." She shakes the bottle; it's nearly full. She eyes my runner critically. "Are you drinking, or are you fake drinking?" He is noncommital.
- Eventually, she shrugs and tells me, "you can walk him to the next aid station."
- One of the aid station volunteers gives Jordan his own personal Red Bull. Jordan drinks half of it and, amazingly, RUNS out of the aid station. Me: "You look great!" Him: "Red Bull gives you wiiiings!"
- Mile 91. We're in a darker place now. My runner is cranky. "We're going, like, one mile an hour." We roll into AS 2 and Julie Berg looks him over. "I see he's at the rebellious stage." She feeds him her homemade Oreo brownies. He revives enough to move on.
- We complete the last big climb. Jordan is all smiles. The view from the ridge is amazing.
-  Last technical descent. We are passed by another 100 miler, paced by Wayne. I envy their blistering 16 min/mile pace.
- Mile 97: Jordan is moving along at a zombie like shamble. When we stop at the final aid station, he's jittery and isn't talking much. He downs the rest of the Red Bull they've kept for him and mumbles, "Let's go!"
- Mile 99: We hit the final dirt road. Jordan, who has been largely noncommunicative for the last hour, looks surprised. "This is the dirt road. We're almost there!"
- As we've arranged, I run ahead to the finish line and video his finish. In the last hundred feet, he breaks into an antalgic run. He is beaming. He finishes, looking better than he has in hours.
- I stop moving and realize I've been on my feet for 13 hours. I stagger around, take off my shoes, and change clothes. I'm shaking and am not much for conversation myself until I eat a whole bunch of food.
- By the time I return from my car, Jordan has left (his ride was ready to go). The race is shutting down. I hear an owl at the edge of the campground asking, "Who cooks for you?"
- It's time to go. See you next year, Zumbro. I can't wait to see what will happen next.
Posted by Robyn at 7:56 PM