This weekend was the Superior Fall 100 mile, 50 mile, and Moose Mountain Marathon trail races, on the North Shore of Minnesota. It's one of the highlights of the local running calendar: point-to-point races on the Superior Hiking trail, almost 100% singletrack.

I'd been planning all season to volunteer and maybe pace this one again. I had an amazing time doing just that last year (reports here and here), and I knew I wanted to be part of the biggest race of the season again, one way or another. But I've spent much of the summer recovering from a hamstring/knee injury that dates all the way back to Spring Superior 50k, and while my running has been going well lately, I'm not quite back in ultra-shape. I was going to pace Arika, but when she decided not to start the 100, I didn't seek out another runner to pace, and instead just upped my volunteer commitment. I ended up working two aid stations, from Friday afternoon into Saturday afternoon.

Here is my recap of 21 hours of volunteering. 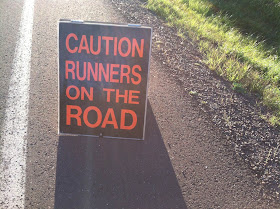 - Arrive at my first aid station, at mile 43, carrying two extra jackets, a headlamp, and a Burrito Union burrito the size of my head. The aid station captain is Leslie, a previous year's top five finisher, an engineer, and an all-around excellent person. She's already got the place jamming.
- A runner comes in after a fall on the trail with a bleeding gouge in his hand. Lisa, a nurse and ultramarathoner with vast race medical experience, hauls out her field kit, which is comprehensive enough to perform minor abdominal surgery or deliver a baby. She rather gleefully announces that she's never used the sterile saline wash before.
- We fill hydration packs, hand out PB&J, make quesadillas. A few runners drop with injuries. One or two who probably should drop decide not to and gimp off onto the next 7.7 mile section of trail.

- The sun sets and we all start piling on more layers. The temperature is headed into the high 30s overnight. A runner tells us about an injured runner three miles up the trail, moving slow and getting cold. One of his crew heads up the trail with a jacket and a blanket.

- "I've been peeing blood," a runner tells us. After discussing with our race medic, we sit him down and push beverages to see if rest and hydration will clear things up. After an hour and a half, things aren't clearing up and he reluctantly drops out of the race.
- Bill comes in, collapses into a chair, and refuses to move. He's had problems with salt balance leading first to GI distress, then to cramps. Lisa, his crew, his pacer (who is a psychiatrist), and I all work on persuading him to get out of his chair and onto the trail. He is having none of it.
- We tell him, "Your pacer is a doctor. You'll be in great hands!"
- (I turn to him and say, "Psychiatrist? I'm a pathologist!" We shake hands. Lisa rolls her eyes and says, "So I really AM the most qualified person here, aren't I?" Without hesitating, we both reply, "OH YES.")
- I leave Bill to his crew and go make some more PB&Js. When I next look over, he's on his feet and heading for the trail with his pacer. His crew can't quite believe it either. We all congratulate ourselves vigorously.
- Susan Donnelly strides into the aid station, working on her FIFTEENTH! Superior 100 finish. She's a legend.
- She browses the food table. "Quesadilla?" I offer.
"Vegan-ish," she demurs.
"We've got some vegan soup," I tell her. "Made with real vegans," I add. She snorts. "Organic, free-range vegans!"
She's playing along. "Where do you get the vegans from?"
"We just use the ones who hang around at the aid station too long," I tell her. Leslie the aid station captain adds, "You've got three minutes!"
- The aid station is winding down as we approach cutoff time. I spend a little time with Rick, who is dropping with persistent vomiting. I help pack things up and take down tents and tables. At 11 pm I say goodbye to the crew and head to my next aid station.
- On the walk to the car, there are thousands of stars, anad a streak of faint green Norther Lights paints one quadrant of the sky. It is breathtaking.

- Sugarloaf aid station is at mile 72. By the time I arrive, the two front runners are hours further on, but nobody else has come through yet. (The winner ends up crushing the course record by a 90 minute margin.) It's near midnight now, and crews are quietly talking or sleeping. It's quiet and mellow after County Road 6.
- The early runners through here are generally fast, feeling good, and well crewed. I get a two hour nap in aid station captains Jan and Joe's tent, emerge around 3 am, and start alternating black coffee and bacon. After a couple rounds of this, I am ready for anything.
- Temperatures are down to the high 30s and I'm barely keeping warm in two wool shirts, two jackets, and a wool hat. Kevin is volunteering here with me and burrows under a blanket when he's not busy. It's not his first aid station rodeo, but it's his first overnight gig. He's 17 and has been running ultras for two years. I invited him up because I thought he'd be great company, and so that he could see how much of the world there is beyond high school. He is rising to the occasion and is a great addition to the aid station.
- There's no medical person at this aid station, so I cruise around and look for runners with a thousand yard stare, or who come in and look blankly at the food, mumbling, "Nothing looks good," or the ones whose water bottles are still ominously full after 9.4 very difficult miles from the last aid station. We have terse, bluntly worded conversations about puking, pooping, cramping, and bloating. I push hot soup, bananas, and reassurance.
- A runner comes in wearing a tank top and armwarmers. He's cold, and his extra clothes are at the next aid station, 5.7 miles up the way. I hand him one of my buffs to wear around his neck, and say, "Just leave it by the drop bags at the finish line." Incredibly, that's where I find it, 18 hours later.
- Shawn stumbles in and announces, "I'm very sleepy. I fell asleep on the trail. I think I need a nap." I lay out my Thermarest pad and a blanket. She burrows in and I set my watch for 15 minutes. Then, another 10. Finally, I return with a cup of coffee and a pep talk about the effect of sunlight on cortisol levels. (She's a doctor, the sun is rising, I don't know, it made sense when I was doing it.) She gets up and head out with no further problems.
- I explain to Kevin the difference between civil twilight, nautical twilight, and astronomical twilight. He accuses me of making it up. I point out that it's now civil twilight regardless. We all begin to warm up and awaken as the sun rises. 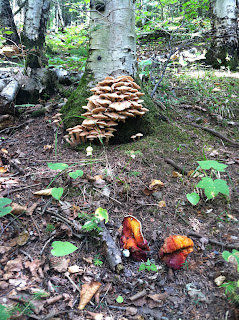